A Timeless Village, Whose Time Has Come 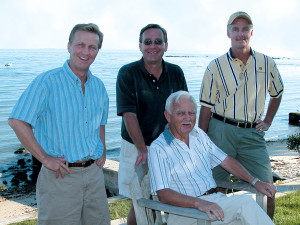 The story begins with a love of land and the entrepreneurial spirit of one man. In 1921 Warren Richards, Sr. with fifty dollars borrowed from his mother, created a small landscaping business called Clinton Nurseries. With little more than a pickup truck and determination, he grew a business that today incorporates more than 500 acres in Clinton and surrounding towns, and is a key supplier of ornamental nursery stock to companies like Wal-Mart, Lowe’s and Home Depot. His son and three grandsons have inherited the founder’s love for the natural environment. This is the first parcel of land they have ever developed for a community.

Their vision started with the donation of 42 acres of sensitive salt marsh and perimeter land to the Clinton Land Trust to remain forever wild. Another 20 acres were set aside as open space, creating an environmental buffer to be replanted with native species of plants. This layering of natural buffers enhances the wetland’s viability as a prime wildlife habitat for shorebirds such as the Snowy Egret, Great Blue Heron, Glossy Ibis, Osprey and Northern Harrier. An environmental engineering firm designed a comprehensive site plan, and this actually improves the ecological conditions on the site to passively support the avian, terrestrial and aquatic species in the area forever.

The Richards family then developed a plan for an organic, small scale village of architecturally accurate saltboxes, capes, Federal, Georgian and shingle style homes arranged around two common greens, each with a view of Long Island Sound, Cedar Island, Clinton Harbor and/or the Hammock Salt Marsh. The result is a unique waterfront community of homes that reflect the rich 375-year history of the town of Clinton and profoundly respect the ecological harmony of the site.